Skip to navigation Skip to main content Skip to footer

Adjusted EBITDA is a non-GAAP financial measure which is defined as net earnings before interest expense, income taxes, depreciation and amortization, and further adjusted to exclude goodwill and asset impairment charges, loss on debt extinguishment, separation and integration costs incurred in connection with acquisitions of ConvaTec and Unomedical and other non-recurring items. See Table 2 (below) for a reconciliation of the Company's estimated operating income to estimated Adjusted EBITDA, for the fiscal fourth quarter and full year ended December 31, 2011 compared to the same periods in 2010.

The Company was in compliance with all financial covenants under its secured and senior notes and its bank credit facilities as of December 31, 2011.

The Company expects to issue its annual report, including complete 2011 financial results in April 2012 upon completion of its annual audit. All 2011 amounts included herein are unaudited and are therefore subject to change.

ConvaTec is a leading developer and marketer of innovative medical technologies that have helped improve the lives of millions of people worldwide. With four key focus areas - Ostomy Care, Wound Therapeutics, Continence and Critical Care, and Infusion Devices - ConvaTec products support healthcare professionals from the hospital to the community health setting. 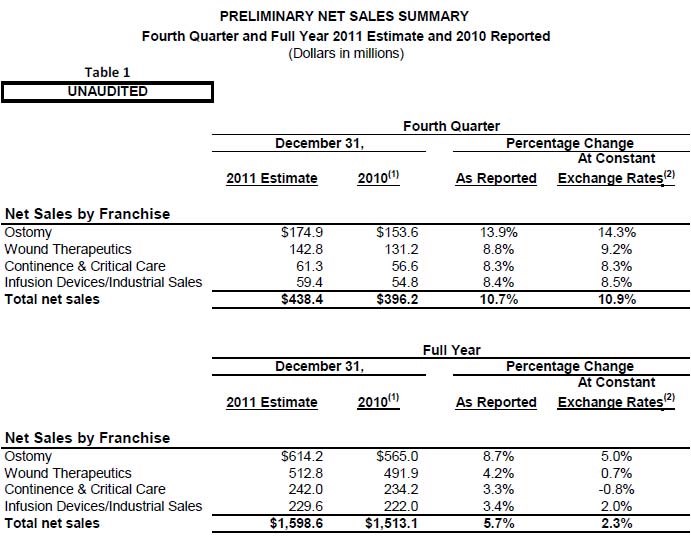 (2) For the Fourth Quarters and Years ended December 31, 2011 (estimated) and 2010, the split of non-recurring costs between cash-related and non-cash are as follows:

(3) Effective January 1, 2011 in conjunction with our December 22, 2010 refinancing, pursuant to the new credit agreement, realized foreign exchange gains and losses were included in the Adjusted EBITDA profit measure.